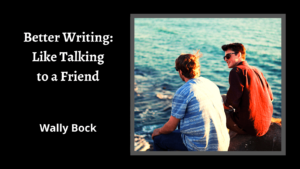 Elmore Leonard excelled at just about every kind of popular writing you can imagine. He wrote pulp fiction, Westerns, and crime fiction. Many of his books also became movies. Leonard wrote “10 Rules for Writing,” published in the New York Times in 2001. Then, he wrote an 11th rule that sums up the other 10. Here it is:

There are two basic rules of conversational writing. Write to one person at a time, not an audience. Write for the ear, the way you talk, and not for the eye.

Here are four suggestions to guide your writing. They should help you write conversationally, the way you talk to a friend.

Write simple. Write the way you talk when you’re having a casual conversation with a friend, maybe on the deck on a summer evening. Use simple sentences. Use the active voice. Passive voice makes readers work harder.

Use the words your friend will understand. The fewer explanations, the better.

Use simple words. You don’t want to be like that fellow described to me as “talking like he got a vocabulary for Christmas.”

A good test is whether the language you’re using would work if you were talking to an intelligent 15-year-old. When in doubt, find one and try it out.

Abstract concepts make the reader work harder, just like with a friend in conversation. Human beings like concrete words and concrete examples. If you must use an abstraction, couple it with a concrete example.

When you’re talking to a friend, you probably use stories to make your ideas interesting and clear. Do the same when you write.

Human beings have been using stories to pack a lot of information in a small space for as long as we’ve been using language. Don’t fight it.

Use simple sentences and active voice.

Use vocabulary your friend will understand.

Use stories to pack a lot of meaning in a friendly package.