Better Writing: Why We Rewrite 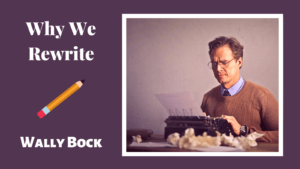 I hated spinach when I was a kid. Every time we had it for dinner, I would ask, in the whiniest voice possible, “Do I have to eat my spinach?”

My mother would patiently explain that, yes, I did have to eat my spinach. I had to do it because it would help me grow strong and healthy.

Rewriting is a lot like my spinach. You may not like it, but you must do it if you want your piece to grow up strong and healthy.

Getting It Right Is Hard

H. L. Mencken said that “0.8 percent of the human race is capable of writing something that is instantly understandable.” William Zinsser said, “He may have been a little high.”

The problem really seems to be one of human nature. We have ideas about what we want to write, and those ideas always seem perfect. My client and friend, Terry Moore, wrote me, “Sometimes my inspiration seems worthy of being a devotional. Yet, when I read what comes out, it often looks like drivel.”

“All First Drafts Are Crap”

Hemingway said that. Many other writers have said the same thing in different words. The truth is that most of us don’t believe it at the beginning. We must learn the hard way.

Jon was one of the formative editors for me. I remember the first time I gave him a piece of work. He looked at it, then looked at me and asked, “How many times did you revise this?”

I was stunned. I was sure that my first draft was Nobel Laureate quality. But I lied and said I’d revised it three times. That’s when Jon said, “Come around here,” and motioned me to his side of the desk. That was the first of many sessions where he showed me how to write a better piece. He also inspired my deep reverence for the process of rewriting and revision.

So, how many times should you rewrite? The answer to that one is the all-purpose answer for just about everything, “It depends.”

I use the standard I got from Jon 50 years ago. You rewrite and revise if you are making your piece easier to read or easier to understand. When you’re making things different, but not better, it’s time to stop.

Some Examples of How Many Times to Rewrite

We used letters of the alphabet to indicate different drafts. We started with A. Terry revised one of the chapters in his book, Building Legacy Wealth, so many times that we ran out of alphabet and had to start doubling up.

One of the classic stories of rewriting and revising involves Ernest Hemingway. In 1958, he was interviewed by The Paris Review. He said that he had rewritten the conclusion to A Farewell to Arms “39 times.”

It’s 47 times. That’s the number that his grandson, Sean Hemingway, came up with when he edited the Hemingway Library Edition of A Farewell to Arms. That edition includes the author’s 1948 introduction, early drafts, and all the alternative endings.

All good writing really is rewriting.

We simply can’t write something that’s instantly the best it can be.

All first drafts are crap.

Rewrite to make the piece easier to read or more understandable.

Rewrite or revise until you’re making it different but not better.

“ Wally Bock took my idea for a comprehensive book on newsletter marketing and made it a reality. ”
~ Jim Palmer
The Newsletter Guru
Wally Bock © 2021  |  Site By Weaving Influence
Privacy Policy  |  Terms Of Use  |  Site Map  |