The Statue in the Stone 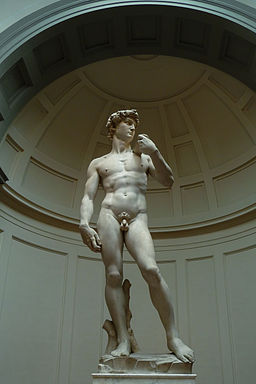 It’s possible that more people recognize Michelangelo’s David than any other sculpture in the world. When Michelangelo completed it in 1504 it sealed his reputation as the greatest sculptor of his time and, perhaps, all time.

The story of the stone

The marble that became David came from the Carrara quarries in Tuscany in 1464. The Overseers of the Office of Works of the Florence Cathedral commissioned Agostino di Ducco to create a statue of David. Some authorities think he worked under Donatello’s direction. He ceased work in 1466. No one seems to know why.

A decade later, Antonio Rossellino took up the challenge. His contract was terminated after a short time. The stone, now marred by the attempts of two men to turn it into something beautiful was left outside, exposed to the elements for twenty-five years. That’s when the Overseers turned to Michelangelo.

He was 26 at the time and already famous. He started carving the old, damaged piece of marble in 1501.

The story of the statue

The finished David is more than fourteen feet tall. It weighs six tons. There were already many statues and paintings of David, but Michelangelo’s was different.

Always before, David was presented after his victory over Goliath. Michelangelo shows us something different. It is David the shepherd boy, alert and strong, in the instant before greatness. David the King is in that statue, invisible to the eye, but known to the heart.

If you’re writing, the unprocessed events and emotions of life are your stones. They’re waiting for you to turn them into the articles and blogs and books that will be your statues.

Remember that the stone that became David defeated two competent sculptors. They couldn’t imagine the statue in the stone and make it come to life.

Under Michelangelo’s hands the flawed, weather-worn stone became a thing of beauty. Everything was already there, Michelangelo didn’t add a thing except his vision of what the stone could become.

There are events in your life and in the world that you can turn into something amazing. You have to imagine the story in the stone and have the courage to set it free.