Writer’s Block: An Ounce of Prevention is Worth a Pound of Cure 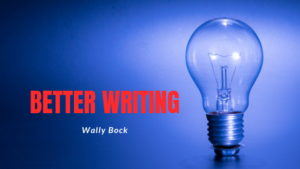 “An ounce of prevention is worth a pound of cure.”

Benjamin Franklin said that. Firefighting in Colonial America was a sometime affair. Fires destroyed whole blocks of houses in Philadelphia and other cities. In 1733, Franklin called for citizens to organize fire companies so they could put fires out before they spread.

The result was the model for volunteer fire brigades across the colonies. While other cities lost whole blocks of houses to fire, Philadelphia only lost one or two houses at a time.

When it comes to the dreaded writer’s block, “an ounce of prevention is worth a pound of cure.” You’re less likely to suffer devastating writer’s block if you do one, simple thing.

Know what you’re going to write before you start.

Too many writers begin a writing session by thinking about what to write. Sometimes that works. When it doesn’t you can find yourself wandering around your writing cave and fighting back tears when the ideas don’t come. Pressure kills creativity.

Prevention is simple. Decide what you’re going to write in the next session before you finish the current one. When you do that, the pressure’s off and you’re more likely to come up with a good idea.

But wait, there’s more … benefits that is.

When you know what you’re going to write next, your brain can work on it between sessions. You’ll probably get good ideas about phrasing, structure, and more. Make sure you capture those ideas when they pop up.

Prevent writer’s block by deciding what to write next at the end of every writing session.

“ Wally Bock is not only an excellent collaborator, he has wonderful strategic insight and a good nose for an interesting story. ”
~ Tom Hall
Author of Ruthless Focus
Wally Bock © 2020  |  Site By Weaving Influence
Privacy Policy  |  Terms Of Use  |  Site Map  |