Dirty Little Secrets of Creativity and Your Book 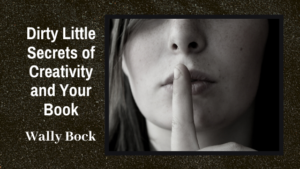 Some things are predictable. Say I’m at a gathering with several people we don’t know. If they find out that I write for a living, someone is sure to ask me: “Do you think it’s true that everyone has a book inside them?”

I know that question usually means, “I think I might like to write a book. Do you think it’s possible?” Often, my standard reply works. “I think that if you can read a book, you can probably write a book.”

If the conversation goes any further down that path, the other person is likely to tell me that they’re not really creative. And when it comes to a book, they’re sure they don’t have anything new to say. Well, if that could be you, this is a post you should read.

There are two dirty little secrets that you should know about getting great ideas and writing a book. Let’s start with the idea part.

I know that you’re creative. I can say that without knowing you personally because everybody is creative. Coming up with new ideas is something that human beings do naturally. You must recognize that fact. Then, you can do what “creative” people do differently.

Capture Ideas When You Get Them

One thing that sets “creative” people apart from the rest of us is that they capture their ideas. They capture the good ones and the bad ones. When you have an idea, it’s too soon to know how it will turn out.

There are three ways people capture ideas. Some use a notebook that they carry with them all the time. Others use index cards. And some use a digital voice recorder. I know it’s possible to use your smartphone as a digital recorder, but that doesn’t seem to work for many people.

You capture ideas so that you’ll remember them later. Our memory for an idea is really short. You might get an idea while you’re walking the dog or taking a shower or reading. If you don’t capture it right away, it will disappear. Ditto for those ideas that wake you up in the middle of the night.

Once you develop the habit of capturing ideas, it helps to know when you get a lot of good ideas.

Where are you most likely to get your next kiss? Will it be by going out on the street and soliciting kisses from the people you meet? Probably not. In fact, that behavior could land you in jail.

It will also help you to know a little bit about the psychology of getting good ideas.

Graham Wallas was a founder of the London School of Economics and a psychologist. He wrote several books. In 1926, he wrote The Art of Thought. That’s where he describes the way our minds work when we come up with ideas that lead to innovation. I call it the Wallas Cycle.

Wallas called the first step “Preparation.” That includes all the things you’ve learned over your lifetime. You’ll also probably do some hard thinking about possibilities and some background research. That’s all preparation. If you don’t do preparation, the rest of the cycle doesn’t work.

Usually, you work on the idea until you get to a point where you’re chasing your tail. You’re making things different but not any better. You’re not getting any new ideas or having any new insights. The best thing to do then is to quit working on the problem.

Actually, you quit working on the problem with your conscious mind. During what Wallas called the “Incubation” stage, your mind keeps working just out of conscious sight. You’re likely to get a new idea while you’re doing something else. You can push the process by sitting in that chair where you get those good ideas. Getting the idea was what Wallas called “Illumination.”

Illumination is that sudden flash of insight. Make sure you capture it because it’s likely to be good. Good, but not perfect or probably even ready for prime time.

Wallas called the fourth step in his cycle “Verification.” Most ideas don’t show up perfectly formed. You’ve got to shape them, mold them, combine them with other ideas, and shave off some parts. Verification is the part of the process where you shift from getting ideas to innovation. If you’re writing a book, it’s the point where you take your idea and put it into words and sentences and paragraphs and chapters.

Dirty Little Secret: Your Book Idea Doesn’t Have to Be a New Idea but It Must Be Unique

Forget the idea of having an insight no one’s ever had before. That’s not likely to happen. With all the millions of people on the planet, all generating good ideas, the great ones don’t need to be discovered. But they can be expressed in new and interesting ways. That’s where you come in.

Make your book unique by filtering it through your own experience. Do some proprietary research to have some statistics no one else has. Instead of using the stories that every speaker on the platform (real or Zoom) uses, use unique stories, preferably your own.

Capture ideas when you get them.

Dirty Little Secret: Your book idea doesn’t have to be new, but it must be unique.

Make your book unique with your own research, insights, and stories.