Will you be like Bill the Genius or Larry the Cable Guy? 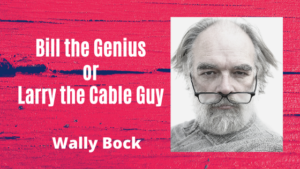 Bill was a genius. His clients said so. They loved the results they got by paying attention to his ideas. He was easily one of the smartest people I’ve ever known. But you probably don’t know much about him, because Bill never got that book done.

Friends and coaches told him to write a book. They urged him to use the book to spread his ideas and build his reputation. They told him he would be able to increase his fees, get more speaking engagements, and have an even greater impact.

That’s why Bill contacted me. And he wrote the book, sort of.

The first thing Bill did was read a lot of books about how to write books. He took copious notes. He cross-referenced the notes and wrote summaries of what he’d learned. In what I was sure was a very clever bit of coaching, I suggested he read a book about the virtue of getting things done. Ready, fire, aim, and all that.

Well, he wrote a manuscript. It never became a book because he kept changing it. He hired student interns to evaluate his manuscript. He correlated their ideas and made some changes.

Every client engagement, every book he read, almost every conversation he had gave him an idea for a way he could change the book. And so, he did. After three years, there was no book, I was frustrated, and we parted ways. Years later, there’s still no book.

Psychologists can probably tell you why there are people who simply don’t finish things. I knew a young woman who went through a two-year master’s program in English and took an incomplete in every course. Only the threat of having to explain to her parents why she was getting a failure could convince her to finish a paper or a reading assignment.

The truth is that no book you’re working on will make much of a difference. No book that you’re still working on will boost your reputation or let you raise your fees or bring you more speaking engagements. That’s a tragedy.

In this world, we need all the good ideas we can get. Your ideas and your innovations and your practices might be just the thing that makes a huge difference for people you’ll never meet, if you have a book.

Done is better than perfect.

Published is better than perfect.

You can be like Bill, a genius only a few people know about, stuck on a career plateau. Or, you can take the advice of Larry the Cable Guy and git ‘er done!

“ Wally Bock took my idea for a comprehensive book on newsletter marketing and made it a reality. ”
~ Jim Palmer
The Newsletter Guru
Wally Bock © 2020  |  Site By Weaving Influence
Privacy Policy  |  Terms Of Use  |  Site Map  |