Writing a Book: How to Defeat the Blank Screen 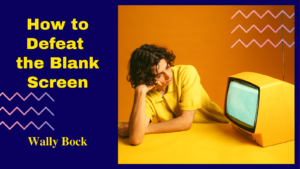 The best writing sessions start strong. They build momentum for writing and even for the rest of the day. But there’s a problem. Too many writers start their writing session by staring at the screen, starting to prepare to begin to get ready to write. They’re trying to think about what to say.

Many of my clients have had that experience. Most of the writers I’ve talked with have as well. I’ve had it too. The problem isn’t writer’s block, it’s poor technique. There’s a simple solution.

Take It from The Experts

Ernest Hemingway suggested the solution in an article he wrote for Esquire Magazine in October 1935.

“The best way is always to stop when you are going good and when you know what will happen next.”

Mark Bowden made the same point in a short piece he wrote for Publishers Weekly in March 2019. He said that John Barth suggested that you don’t just stop when things are going well. He suggested that you stop in the middle of a sentence. He said: “That way, you’ll know exactly where to pick up the next day.”

How to Know What You’re Going to Write

Don’t wait until you sit down to write to make the decision of what you’re going to write. Make the decision about what to write next at the end of every session. That way, you’re ready to go for the next session.

What you’re doing is adapting to writing something that’s a common practice for firefighters. When a fire is out, they don’t roll back to the firehouse and take a quick nap. Instead, they carefully stow all their gear, check their supplies, make sure everything works. That way, when the bell rings, they don’t have to think about preparing, they just put on their gear, get on the truck, and go.

A great writing session can build momentum for your whole day.

Avoid wondering what to write by using a technique that worked for Ernest Hemingway, Mark Bowden, and other writers.

Know what you’re going to write before you start your session.

Decide at the end of each session what you’ll begin with next time.

“ Writing this book would not have been nearly as educational or enjoyable without the help and guidance of Wally Bock, who evolved his role from vendor to business partner. ”
~ Rod Santomassimo
Author of Brokers Who Dominate
Wally Bock © 2021  |  Site By Weaving Influence
Privacy Policy  |  Terms Of Use  |  Site Map  |