Writing a Book: Make Your Book a Conversation, not a Lecture 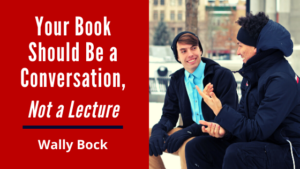 I don’t even have anything against academic writing. It’s fine for academics. But if you want to write a good business book, you must write differently. I learned that years ago from a fine editor.

The other day, someone asked me what the best advice I ever got from an editor was. I had to think. Editors who worked with me when I was starting out gave me lots of good advice. So did editors for later books that I wrote. Oh, sure, I fought some of them tooth and nail about stuff. But most of the time, they were right, even if I didn’t get it at the time.

Out of all that advice, though, I can pick one “best.” Over 40 years ago, Jon Anderson, the editor who really shaped my writing, told me that I was writing like an academic. Here’s a paraphrase of what he said. I don’t remember the exact words. I’ll tell you why in a minute.

“You’re writing like an academic. Don’t lecture your reader. Write the way you would tell things to a friend. Use the language you use every day.”

I don’t remember what his exact words were, the first time John gave me that advice. I do remember how he drove it home over and over again when I lapsed into fancy, academic language. He’d ask a simple question.

Your book shouldn’t be a lecture. It should be a conversation with your reader. So, write the way you use language in conversation.

When you get all fancy, with complex sentences and big words, it doesn’t sound like conversation. It sounds like writing.

Elmore Leonard wrote 50 novels. Most of them were crime fiction or Westerns. He also wrote 10 Rules for Writing. You can find it in several places on the web and even buy a book of it. Here’s a link to an interview with The New York Times from 2001. The ten rules are in it.

In addition to the 10 rules that I mentioned, Leonard had another rule. He said it sums up the other ten. Here it is.

“ Wally Bock is not only an excellent collaborator, he has wonderful strategic insight and a good nose for an interesting story. ”
~ Tom Hall
Author of Ruthless Focus
Wally Bock © 2020  |  Site By Weaving Influence
Privacy Policy  |  Terms Of Use  |  Site Map  |