Writing a Book: It’s Not Magic to the Magician 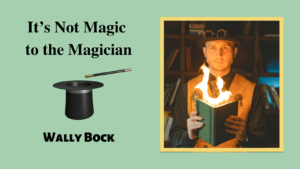 It was our first weekend at the beach since before COVID. Even though the weather was overcast and wet, the company was great. We spent most of Saturday afternoon sitting on the porch and talking about all kinds of things. Then, my host said, “I could never do what you do.”

I’ve heard that song before. Lots of people treat writing a book like it’s either a massive feat of intellectual prowess or magic that they could never understand. That’s just not true. We talked about different skillsets and how they worked.

My host is one of those people who seems to know how to make businesses work. When he was in college, he flew his own plane from the college to the beach areas. He had a real estate license, and he spent the weekend selling lots. Then, he jumped back in his plane and went back to school. He started lots of other businesses too.

I asked him what it took to run a chain of pawn shops like he did. “It’s easy,” he said. He said about the same thing with restaurants. He’d owned several, they were all successful, and he sold them. He said, “It’s simple. There’s no magic to it.” Of course not. It’s not magic to the magician.

That’s true of just about any field. People sometimes think writing a book is different. But it’s not magic either.

Do You Want to Write A Book?

You may not have any interest in writing a book. That’s fine. But a lot of people want to write a book for a lot of good reasons.

That’s all great. But if you want to write a book to get rich or super-famous, it probably won’t work out the way you’d like. Hardly anyone makes money from the sale of the books they write. Don’t let the glitter of famous writers fool you. The average author makes far less than the average household income.

If you want to write a book, you can learn the techniques. You can get help with any that you don’t want to take time to learn. But you need to be aware of something.

For a year or more, writing your book will dominate your life. It’s hard, emotion-consuming work. It will suck up time that you used to use for things you liked to do. It will steal time from your important relationships.

That hard work, that time, that expense, that impact on relationships is real. It’s why so many people start a book and don’t finish. What about the ones that do?

You Need A Big Why

If you are going to go through the effort of learning new techniques, hiring help, and altering your life, you’d better have a good reason. Is your why big enough to sustain you when the going gets tough?

I’ve worked with clients who had a big why and got their book done. I’ve worked with others who gave up the book project or didn’t start it because their why wasn’t big enough.

If you can read a book, you can probably write one. But there’s technique to be mastered or hired and the project will dominate your life for more than a year. There are times when it will put your sanity and your closest relationships to the test. Some people have a why big enough to make the sacrifice. Others don’t. Which are you?

Remember: It’s not magic to the magician.

If you can read a book, you can probably write one.

Writing a book is more about technique than brainpower.

You can learn how to write a book.

You can get help with almost everything.

If you write a book, it will dominate your life for a year or more.

You must have a why that’s big enough to sustain you while you create your book.

“ Writing this book would not have been nearly as educational or enjoyable without the help and guidance of Wally Bock, who evolved his role from vendor to business partner. ”
~ Rod Santomassimo
Author of Brokers Who Dominate
Wally Bock © 2021  |  Site By Weaving Influence
Privacy Policy  |  Terms Of Use  |  Site Map  |